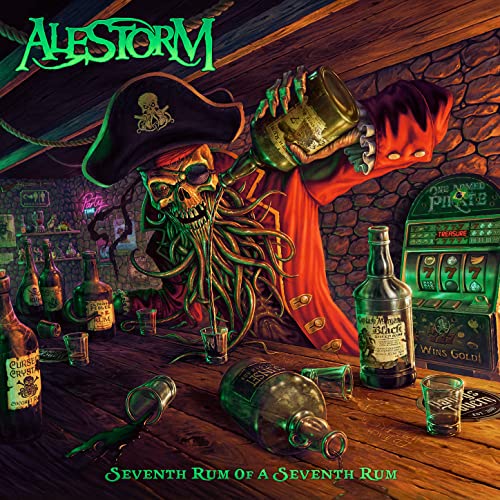 “Oh wow! It’s time to put on your pirate hat and inflate your rubber ducks, because the world-famous Pirate Metal Drinking Crew ALESTORM, have just set sail on a new voyage with their seventh studio album, Seventh Rum of a Seventh Rum! Produced once again by their long-time co-conspirator Lasse Lammert, this epic swashbuckling adventure is set for release on June 24, 2022 via Napalm Records.

The band spent two years during the lockdown going insane and frantically dredging up the craziest pirate metal anthems from their treasure chest of ideas, and have created the most epic and serious (yes, serious) sounding Alestorm album you’ve ever heard. From the symphonic choir-powered “Magellan’s Expedition” which tells the tale of Ferdinand Magellan’s historical circumnavigation of the earth in 1522, to the rousing anthem “Under Blackened Banners” which features intense technical riffing and exquisite solo duels, “Seventh Rum of a Seventh Rum” is a real throwback to the early days of “Captain Morgan’s Revenge”. But fans of the modern Alestorm sound need not worry either – there’s plenty of party mood in the aptly-named future hit song “P.A.R.T.Y.”, and the high speed insane folk metal banger “Cannonball” has the most ridiculous and offensive lyrics you’ve ever heard in a pirate metal song (it makes “Fucked With an Anchor” sound tame).