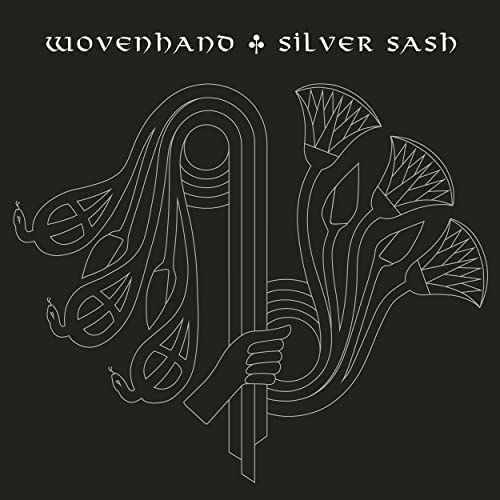 Silver Sash is the first sign of life by David Eugene Edwards since the critically acclaimed Star Treament in 2016. The new album is the first Wovenhand opus completely written in cooperation with Chuck French, who is also known as a guitarist for aggressive Emocore outfit Planes Mistaken For Stars. Both know each other for ages. Finally they found the time to write this astonishing piece of an album. „The music was recorded in my house in Denver with the help of our dear friend Jason Begin. David recorded his vocals at his house (which also happens to be 3 blocks away). I had a bunch of music in various states of existence, of various ages, languishing in my computer. I made a playlist for David and we just started to devour them bit by bit. Some were scrapped, but most were utilized“ says French. The making of Silver Sash has taken longer than for any previous Wovenhand album. It took more than 4 years until both artists were satisfied with the outcome.

Silver Sash opens with a mighty clash that is Temple Timber, followed by the forward pushing Acacia “galloping across the dry grass fields on a horse into the white bark forest”. Song #3 Duat Hawk is the mystic counterpart, focussing on Edwards’ rich, billowing and emotive voice that was always the driving force of his music. Next is the first single Dead Dead Beat which kicks off full tilt. The song’s galloping drums, hard hitting guitars and Edwards’ soaring voice compels us to rise and join the fray. 9 new songs in total were recorded that despite their power and heavyness have lost nothing of its magic and hypnotics as the closing and title track of the album will prove, „the Namesake. It’s a jovial good-bye“ says French. Powerful, subtile and intensly deep. Uniting the calm and mystic side of the early Wovenhand years with the straight forward yet still magic songs of his latest albums.

Over the last two decades, his prolific work in both Wovenhand and the legendary 16 Horsepower has influenced and inspired a generation of musicians throughout the expansive alternative music world. The band cannot be described in traditional terms. Their sound is an organic weavework of neo-folk, post rock, punk, old-time, and alternative sounds. All coming together as a vehicle for David’s soulful expression and constant spiritual self exploration. Sometimes sad and sorrowed and at other times uplifting, Wovenhand are always unforgettable in spirit and sound.